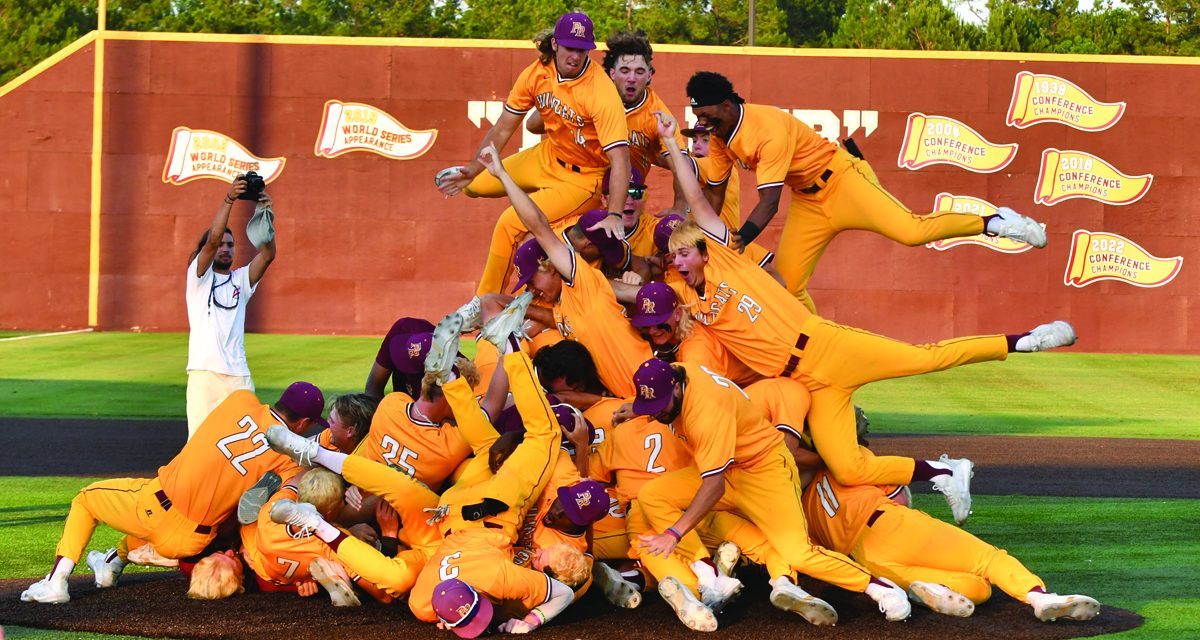 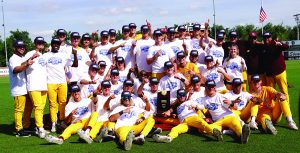 It would’ve been easy for the No. 1 Pearl River baseball team to fold after falling in the first game of the Championship Series, but the Wildcats never lost faith. They turned in an emphatic response in game two, winning 19-1 to force a decisive game three.

Dressed in the all gold uniforms, Pearl River took the field one last time Saturday and turned in a come from behind 7-2 victory over No. 2 Madison to win the program’s first National Championship.

The list of accomplishments for the group has continued to grow as the year went along. With the National Championship victory, the Wildcats captured the championship triple crown after already taking home the MACCC Championship and the Region 23 Championship. The team’s 45 wins are the most in program history.

Additionally, the win was head coach Michael Avalon’s 200th at the helm of the Pearl River baseball program.

“They didn’t make it easy for sure. That’s the way we wanted it and that’s the way we prepared all year,” Avalon said. “We were down early and these guys never quit. That’s just not who we are. Man, what a special group. They simply made history today. All day today, I looked out there and thought this is the last time I get to coach Woody (Taylor Woodcock) and J.G. (John Griffin Bell) in the middle. It’s the last time I get to call pitches with Matt Mercer. The last time I get to coach Tate Parker who is the best player that I have ever coached and he’s so humble about it. It’s a storybook ending to one of the best chapters of my life. I can’t thank all of these guys enough for this because they are a special, special group. All of these guys would tell you this is bigger than us. There have been a lot of really good players and really good teams that weren’t blessed enough to be here. This group will live forever and that’s what is special. This is the best program in the country. This is the best community college in the country. I’m just thankful and blessed to be a part of it and be at Pearl River.”

“The last thing that me and my dad talked about before he passed was when he told me to get back here and win the whole thing. We did it. I’m proud of it. I miss him but I knew he was here before we went out. Before the last inning, Glory Days played. That was his favorite song and it played across the speakers. I knew he was here.”

“Mission accomplished. This is just a remarkable team and a remarkable coaching staff. I’m in awe of them,” he said. “Everything they have done this year has been amazing. Here we stand and we stand as a family. Hats off to coach Avalon, his staff and these players. It’s incredible. We’re so proud of them for bringing home the first National Championship.”

Although Pearl River (45-11 overall) was the first team to come to the plate, it was Madison (49-11) who got into the run column first. The Wolfpack hit a two-run homer in the bottom of the first inning to take the lead.

It was a frustrating start to the day for the Wildcats as every barreled-up baseball seemed to find a Madison glove. Thankfully for Pearl River, Cole Tolbert was electric on the mound over the next seven innings of the game to keep the Wildcats within striking distance.

The bats finally got going in the sixth inning as very fittingly the offensive leader of the team Tate Parker (Gulfport; West Harrison) stepped to the plate and went down in the zone to crush a solo homer to cut the deficit to one run at 2-1. The homer was his 19th of the season. That’s when the rally really began.

Alex Perry smacked the first pitch of his at-bat for a single and D.K. Donaldson (Gulfport; West Harrison) followed him with a single of his own. Matt Mercer was then hit by a pitch to load the bases for Ian Montz. The freshman right fielder saw 10 pitches and fouled off seven of them before roping the 11th into right field for a two-run single, giving PRCC a 3-2 lead in the process.

Two crucial insurance runs came in for the Wildcats in the seventh frame to stretch the lead out to 5-2. Gabe Broadus laced a single between the shortstop and third baseman to get things going. A Parker walk followed by Perry reaching on a Wolfpack error loaded up the bases for Donaldson.

As if Donaldson hadn’t produced enough clutch hits in the World Series, the first baseman chopped a hard single just out of the reach of the Madison shortstop for two RBIs.

Montz opened the eighth inning with a single and advanced to second base on an error by the Wolfpack pitcher. He then moved around to third base after a wild pitch before a Madison balk brought him home to extend the lead 6-2.

Perry added on another big run in the ninth inning, blasting a 1-0 pitch over the wall to put Pearl River ahead 7-2.

Turner Swistak had the ball in the ninth inning and got the first two batters out quickly.

Finally, the third batter of the inning popped the fourth pitch of his at-bat into left field where Broadus was standing. The left fielder drifted to his right, caught the ball and then pandemonium ensued as the Wildcat dugout stormed the field for a dogpile.

Tolbert was nearly untouchable in just his third start of the year. The right-hander finished his outing by throwing seven innings and allowing just two runs. He scattered five hits and one walk while striking out a staggering 11 batters.

Swistak pitched the final two innings for the Wildcats, giving up one hit and striking out another.

Donaldson took home tournament’s Most Valuable Player award after finishing the week 13-for-24 with nine RBIs and five runs scored.

“It’s nothing short of a blessing to be part of this,” Donaldson said. “We made history today and I can’t be more thankful for it. It has me in tears thinking about how there will never be another group as close as we are. I’ve made friends for life and it’s been a special year.”

Parker was awarded the Outstanding Offensive Player award. He finished the tournament 10-for-24 with 10 runs scored, nine RBIs and three home runs.

“Tate is that guy who always gets that big hit. He’s the same all of the time,” Avalon said. “We’ve had a lot of really good players, but leading this team to the National Championship says it all. Somebody had to get that big hit and he’s done it time and time again. He deserves to play professional baseball. He’s an absolute hitter. He’s a winner and he’s going to get it done.”

John Griffin Bell was awarded the Outstanding Defensive Player award. The shortstop was lights out in the field, finishing the week with one error across 16 total chances.

Tolbert was awarded Outstanding Pitcher, finishing the week with nine innings pitched and 16 strikeouts against just five hits, two runs and one walk.

Head coach Michael Avalon was named Coach of the Tournament after leading his team to the title. 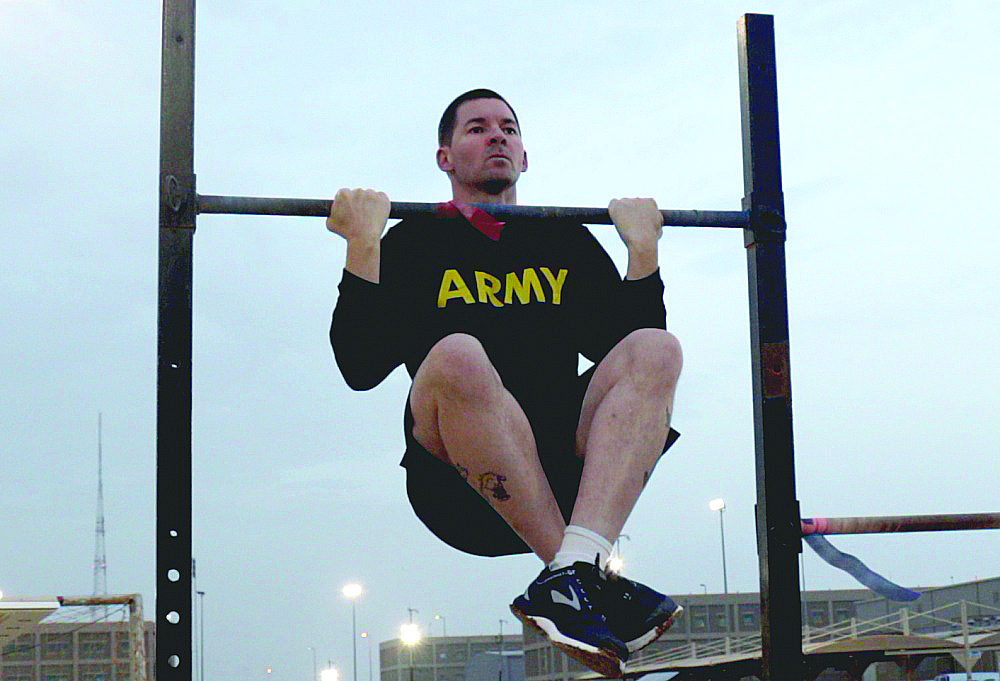