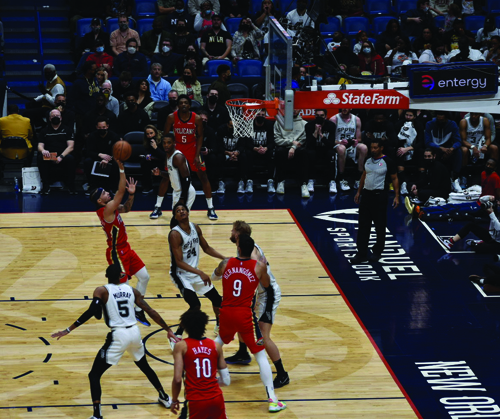 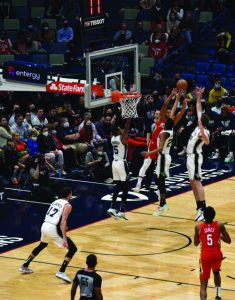 From the start of the game Saturday night, San Antonio Forward Doug McDermott dropped a three-point basket in the first possession and the Spurs never lost the lead for the rest of the game, beating the New Orleans Pelicans 124-114 at the Smoothie King Center.

“It’s just a continuous evaluation of where we are. You look at the two games, but at the same time, have an awareness that it’s  a huge adjustment for everybody,” stated New Orleans Pelicans first year Basketball Coach Willie Green. ” It’s an adjustment for CJ (McCollum). It’s an adjustment for all of his teammates. So, we’ll do  it together. We’ll get back to the drawing board, watch some film, get in practice, and continue to work.”

McCollum, the ten year veteran NBA player and 2016 Most Improved Player of the Year performed well for the Pelicans in his second game after being traded last Tuesday in a three team deal.  The sharp-shooter finished with 36 points on 15/24 shooting, 11 rebounds for a double-double and led the team in assists.

The Spurs led by as many as 18 points during the game and never allowed New Orleans to lead at any point of the contest.  San Antonio turned the ball over five times leading to four points for New Orleans, while the Pelicans had 15 miscues that led to 19 points for the Spurs.

“I think we could have communicated a little more on the defensive end, gave a little more effort, just competed a little more.  They shot the ball well, but those things I feel like we could get better at,” expressed New Orleans Pelicans Rookie Forward Herbert Jones. ” I mean, that’s kind of the league we’re in. You have to be able to adapt, and that’s just part of it. So, we’ll figure it out and get  more comfortable playing with each other as the season goes on. As of right now, everybody is still learning how to play with  everybody, so I feel like we’ll figure it out.”

New Orleans Center Jonas Valančiūnas scored 17 points and 12 boards, resulting in his 34th double-double of the season while the Pelicans Forward Brandon Ingram posted 22 points, two rebounds and two assists, shooting 9-of-19 (.474) from the field and a perfect 3-of-3 from the foul stripe.