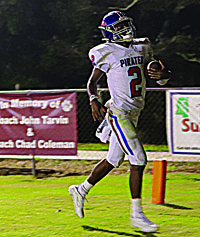 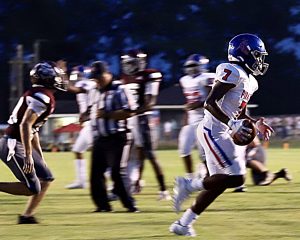 The Pass Christian Pirates defeated the Forrest County Aggies 30-20 in Brooklyn on Friday, September 3, starting their season 1-0.  This was the fourth time in a decade the Pirates played the agricultural high school of Forrest County (FCAHS), winning the last two.

The first quarter was a defensive standoff, ending 0-0, but the Pirates rallied points in the rest of the game to pull through with the win.

“I’m proud of the way we fought and found a way to win,” Head Coach Patrick “Chase” Carmody said after the game in his second year for Pass Christian High School. “It wasn’t pretty. We struggled offensively, especially in the first half. But the defense played their butts off and kept us in it.”

The first half ended in a 7-7 tie, but not before a Pass Christian punt knocked out an FCAH band member. The pigskin was good over the goalposts but hit a percussion student in the head where she fell to the ground.

A cold Dasani water bottle provided some relief, but the band played on.

After a halftime breather, the third quarter started rough for Pass Christian with an interception by FCAHS defensive back James Deloach in the first 15 seconds of the second half.

The Pirates were able to thwart a pass near the red zone and keep their opponents at bay.

Pass Christian kicked a solid field goal from field goal kicker Davon Klein to take a slight lead. It was neck and neck.

With two minutes left in the quarter, the Aggies and Pirates secured matching interceptions after a failed pass was overshot near the Pirates’ 20-yard-line. The Aggies caught a pass intended for a Pirate receiver and ran into the end zone, taking the lead 14-10.

FCAHS foiled a pass as the third-quarter buzzer rang, but a holding penalty gave the Pirates 10 yards and control of the ball.

Another personal foul against FCAHS gave Pass Christian an additional 15-yard advantage and put them at the 25-yard-line. It was all they needed.

Pass High Sophomore Terry Patton caught a pass inside the end zone and regained the lead by two points. A touchdown from Pirates Quarterback Kameron White followed it.

With less than four minutes in the game, White ran an 85-yard-touchdown, leaving the Aggies’ defense in the dust.  The solid extra point from Klein doubled the Pirates’ lead against the Aggies.

FCAHS sophomore Amarion Lowe scored a touchdown to close the Pirates’ lead, but it wasn’t enough. The buzzer rang on a Pass Christian victory.

Coach Carmody said the team made some typically first game mistakes, but he is happy with the win and his team.  “We overcame them and found a way to win,” Carmody said. He saw the team step up when it mattered most and pull together some critical plays.

“Terry Patton made a heckuva play in the end zone. He’s a great athlete, and we’ve got to get him the ball more,” Carmody expressed. “Kam White, our quarterback, is a great guy.”

When White nearly ran the entire length of the Aggie field, the Pass Christian fans were on their feet, cheering him on.

Carmody said the offense did a great job protecting him,

“We had some great blocks by our O-line and our running backs and receivers leading the way for him,” Carmody said. “We’re proud to go 1-0, and we’re looking forward to next week.”

Offensively, White led the Pirates with 285 total yards and being involved with all four touchdowns; either with two from the air and 2 more from the ground.

Patton and A.J. James caught the two touchdown receptions for Pass Christian, as White finished with 190 rushing on 17 carries.

The Pirates return home next week for their first home game against the Purvis Tornadoes, Friday, September 10, 2021 at 7pm.  This is the third year in a row the Pirates have played the Tornadoes; including a 33-21 loss. 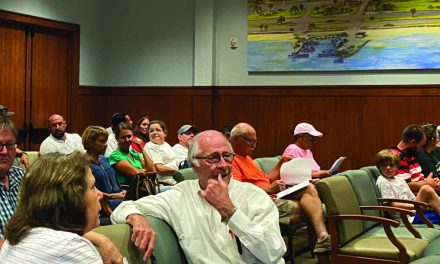 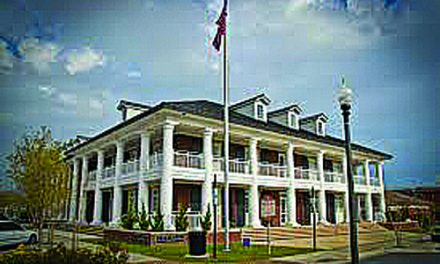