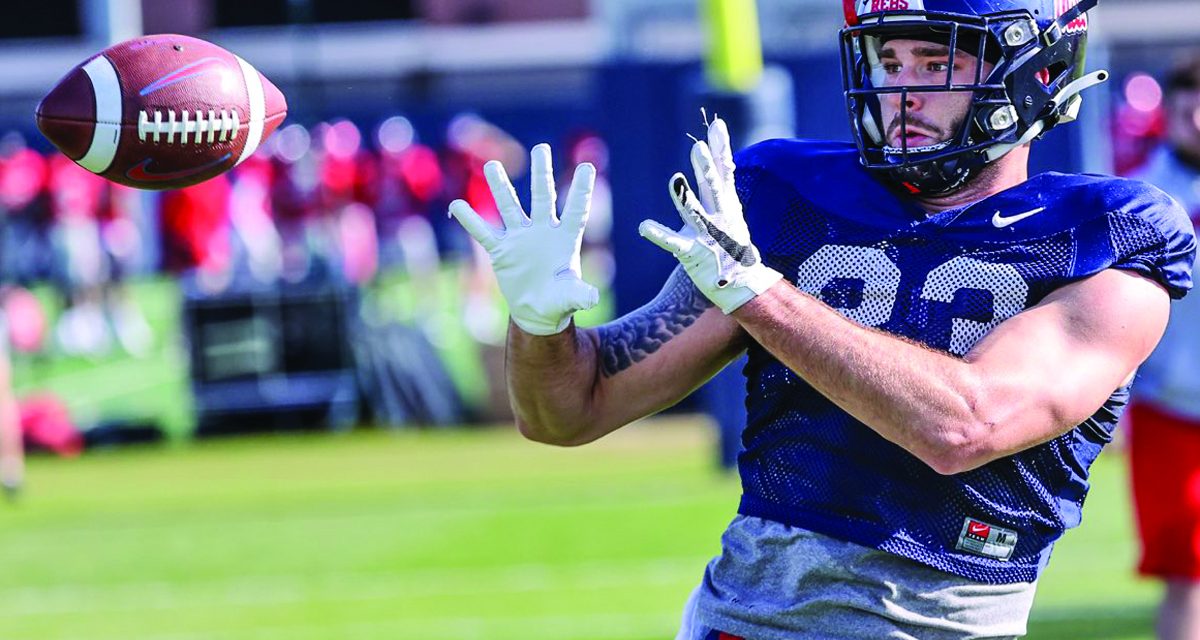 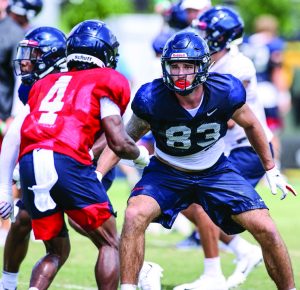 Former Saint Stanislaus All-American tight end Chase Rogers from Pass Christian has had a long row to hoe in college football. However, on Saturday, August 21, the junior tight end ended fall camp as the top tight end for the Ole Miss Rebels and will likely start against Louisville in the Chick-Fil-A Kickoff Classic in Atlanta on September 6.
Rogers originally signed with the Ragin Cajuns of Louisiana-Lafayette in 2017. He made his mark quickly earning third team All-Conference honors his true freshman year. But, an injury took him off the field and he later transferred to Ole Miss where he had to sit out a year per NCAA rules.
Rogers, best know for his bruising blocking style, got snaps last year during COVID shortened season on both the offensive side of the ball and special teams.
Now, fully healthy, Rogers looks to return to the same form and production he displayed which made him a highly touted recruit out of SSC.
Rogers commented, “I am blessed to be fully healthy at this point which has allowed me to fully compete in camp and show the coaching staff what I am capable of doing. I have always enjoyed blocking but I am now catching the ball more in the offense. My biggest improvement has come in my speed in the first 10 yards and my route running is more precise. We are also showing more depth in the offense this season which is a plus for us having to compete in the Southeastern Conference.”
Rogers is battling DJ Thomas and Hudson Wolfe for reps each day.
Rogers added, “We are keenly focused on improving our defensive performance with regard to how we played last year. We have added several new faces on the defensive line and at linebacker to add to the returning veterans on that side of the ball. We know we need to put pressure on the quarterback and we made strides in doing that this year.”
In some publications, Ole Miss quarterback Matt Corral is being mentioned as the best quarterback in the league.
Rogers talked about catching his passes, “Matt Corral throws a bullet. He is extremely accurate with his throwing and puts the ball where we can catch it. We are out to prove that we are the #1 offense in the country.”
Ole Miss head coach Lane Kiffin returned the Rebels to a bowl game in his first season in Oxford. He returns his signal caller and many weapons in the attack. Rogers recalled, “Playing for Coach Kiffin is an honor. He has coached some of the greatest players in the game. He has coached at the highest level and treats everyone with a tremendous amount of respect. He has a way of explaining things we are planning to do in a way that wills us to success. You are going to see a show this year on the turf. We are a team that will fight to the end and never give up.”
Rogers set Mississippi state records for career touchdown receptions (44) and career receiving yards (3,634) en route to being a three-time All-American at tight end as a Rock-A-Chaw.
In his first game of 2021, Rogers will square off against Louisville which will have a familiar face on the opposite sideline.
Rogers’ high school football coach his freshman season at SSC, Gabe Fertitta, will be on the opposite sideline.
Rogers stated, “It will be different seeing him on the other side but it will be good to speak to him.”
For Rogers, a 6’2″ 248-lb tight end, the wait has been far too long. I have always like watching a player with a chip on his shoulder. So, I expect my eyes will be finely tuned in on #83 for the Rebels in 2021.
(Photos submitted by Ole Miss Athletics) 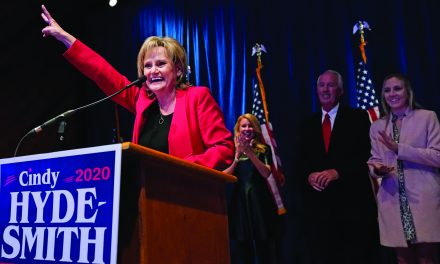