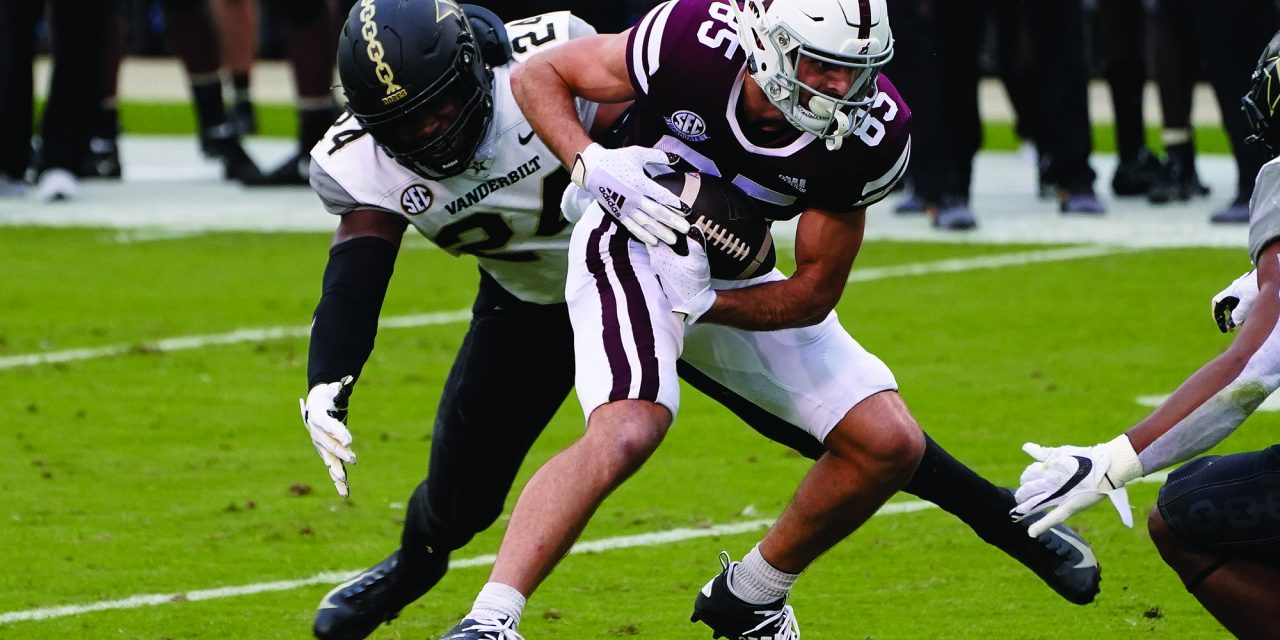 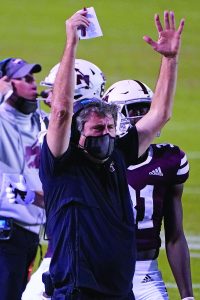 First-year Mississippi State coach Mike Leach says he tried to inspire his team this week by showing them footage of Hall-of-Fame NFL safety Ed Reed.
On some level it must’ve worked, especially on defense.

While quarterback Will Rogers threw for only 226 yards and a touchdown and the Air Raid offense struggled, the Mississippi State defense combined for five turnovers and the team narrowly eked out a 24-17 victory over visiting Vanderbilt on Saturday.

“I’m going to give Ed Reed a game ball. I don’t know where he is, but I’ll figure that out,” Leach said. “We need more guys who can play at the intensity and work level of guys like Ed Reed, Jerry Rice. I don’t know that we can ever match their work level, but it’s a learned skill and it’s something we need to work on.”
Mississippi State (2-4, 2-4 Southeastern Conference) finally won its first home game under Leach after losing their first two attempts to Arkansas and Texas A&M last month.

Vanderbilt (0-5, 0-5) had 478 yards of total offense, more than twice Mississippi State’s total, but ultimately couldn’t overcome its turnover woes. Due to a crippling mix of COVID-19 infections, injuries and suspensions, the Commodores dressed only 58 scholarship players for the game. The SEC minimum is 53.

“We had a great game plan,” linebacker Tyrus Wheat said. “Every day we practice running to the ball, and that’s what got it done. We practice stripping the ball too.”

The Bulldogs led 17-0 at the half, but Ken Seals connected with Chris Piece for a two-yard score late in the third quarter to give the Commodores their first touchdown against Mississippi State since Oct. 11, 2008. Then Keyon Henry-Brooks found a seam in the middle of the field and broke a 27-yard touchdown run on the next drive, and just like that, Vanderbilt was knocking on the door. 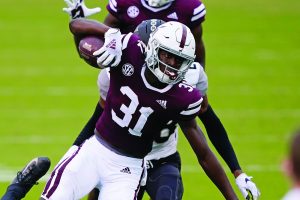 Mississippi State freshman wide receiver Jaden Walley from the Gulf Coast (31) stretches for extra yards after catching a short pass in front of a Vanderbilt defender during the first half of an NCAA college football game in Starkville, Miss., Saturday Nov. 7, 2020. (AP Photo/Rogelio V. Solis)

But the Commodores’ next two drives? An interception and a fumble, both deep in Mississippi State territory. A few plays later Jo’quavious Marks punched the last of those turnovers in for another Bulldog touchdown, effectively ending the threat.

“Ken’s got to take care of the ball, bottom line,” Vanderbilt coach Derek Mason said. “He had a great night, and like, I get that everyone’s into stats, but I’m into wins, ok? I got a young quarterback. He’s going to continue to get better. The thing he’s got to do is protect this team. When you lead this team, you have to protect this team, and he understands that. I love him. He’s a competitor. He’s definitely the quarterback of the future. But the biggest thing you’ve got to do, especially on the road, is protect this team.”

Rogers, a true freshman, was 35-of-46 in his first career start for the Bulldogs, replacing senior Stanford transfer K.J. Costello at quarterback. Malik Heath had nine catches and 79 receiving yards to lead the team.

“He stayed relatively composed, and he rallied at the end, but I thought we left a lot of plays on the table form the middle of the second quarter to the middle of the fourth quarter,” Leach said. “We need to get better about not being part-time spectators and part-time participants in the game.”

THE TAKEAWAY
Vanderbilt: The hard-fought road loss may have been the Commodores last best chance to avoid a winless season. The schedule only gets harder from here.

Mississippi State: After beating defending national champion LSU in Baton Rouge to open the season, then losing four games in a row, Mike Leach finally got his team back in the win column. But there will be little to celebrate in Starkville on the offensive side of the ball. The Bulldogs racked up just 204 total yards and finished with -22 rushing yards.

“That moment meant a lot for me,” Jones said. “It was a huge honor to be asked to do that, and I was proud to be able to finally carry a flag that unites all Mississippians. So that was a huge moment for me personally, and for the state.”

UP NEXT
Vanderbilt heads to Kentucky on Saturday.
Mississippi State hosts Auburn on Saturday. 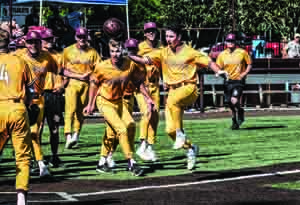 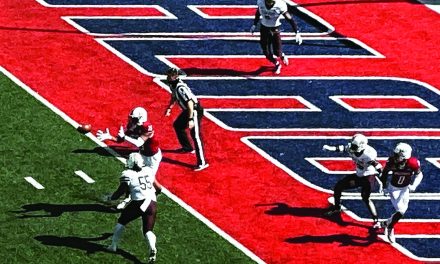