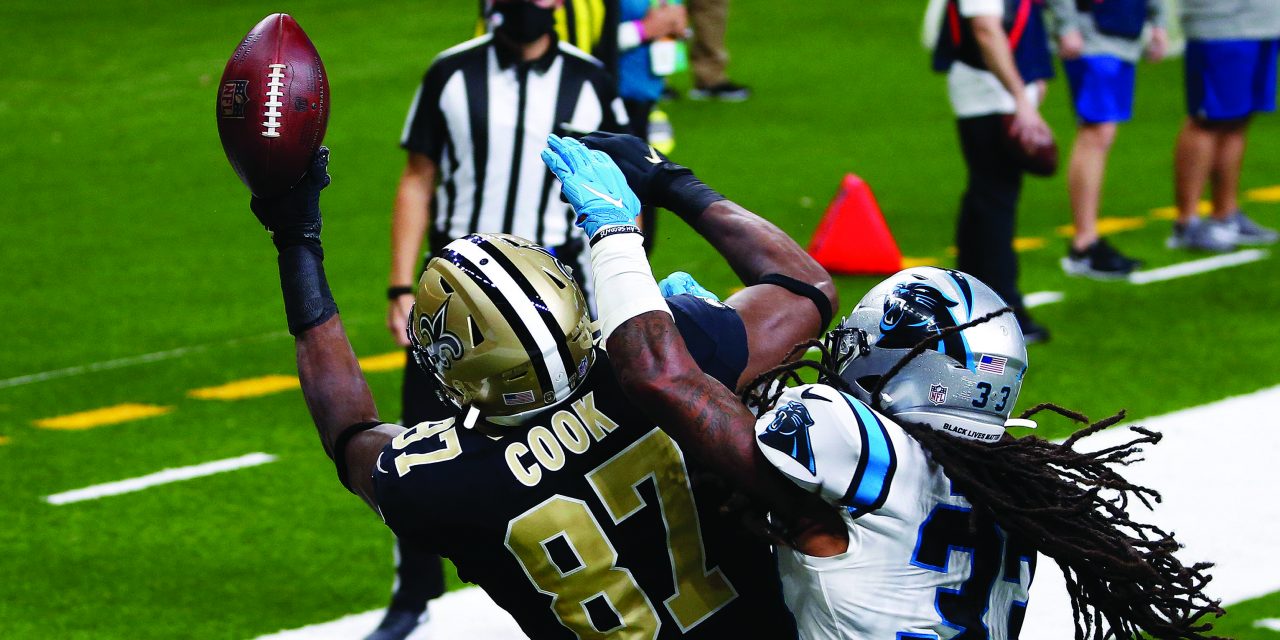 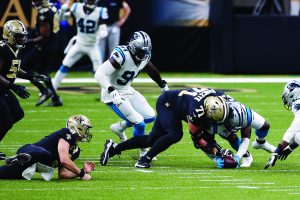 Drew Brees’ veteran savvy and enduring skill as a passer were enough for the Saints to overcome the loss of two top receivers in the past few days.

Brees completed 80.6% of his passes for 287 yards and two touchdowns, and the 41-year-old rushed for a 1-yard score to lead New Orleans to a 27-24 victory over the Carolina Panthers on Sunday.

The vintage performance by the NFL’s all-time leading passer came after the Saints had to adjust their game plan because of Michael Thomas’ hamstring injury on Wednesday and Emmanuel Sanders’ positive COVID-19 test following Thursday’s practice.

“So I can’t say enough about guys’ resolve and resilience to be able to do that,” Brees added.

The Panthers had driven across midfield in the final minutes when defensive end Marcus Davenport’s sack of Teddy Bridgewater led Carolina coach Matt Rhule to send out kicker Joey Slye to try a 65-yard field goal on fourth-and-19. The kick fell just short of the crossbar and the Saints (4-2) ran out the final 1:55, sending the Panthers (3-4) to their second straight loss.

“That sack was a fatal blow,” Rhule said. “That is the only thing that couldn’t have happened there. … Teddy can’t take that sack. The offensive line can’t allow that sack. It just can’t happen.”

Brees’ first touchdown pass went for 4 yards to tight end Jared Cook, who completed the catch after bobbling the ball in tight coverage. The second covered 4 yards to Deonte Harris 2 seconds before halftime. Harris is a second-year undrafted player who was All-Pro as a rookie return man last season. He saw more snaps than usual as a receiver Sunday and had four catches for 46 yards.

Alvin Kamara gained 148 yards from scrimmage, with 83 coming on 14 rushes and the rest on eight receptions.
New Orleans’ methodical offensive approach allowed it to possess the ball for nearly 35 minutes without punting once.

That was enough to overcome a strong showing by Bridgewater in his first game against the Saints since resurrecting his career in New Orleans as Brees’ backup the past two seasons.

Bridgewater was 23 of 28 for 254 yards and two touchdowns, including a 74-yarder to DJ Moore, who also had a 7-yard catch-and run around the right end for a score. Curtis Samuel ran for a 5-yard touchdown that tied the game at 24 at the end of the third quarter.

But Carolina managed just 37 yards rushing against one of the NFL’s top run defenses.

WORKING FAST
Brees was at his best in his final drive of the first half. Excluding a spike to stop the clock with 5 seconds left, he was 6-for-6 for 71 yards during a 75-yard drive in 1:35 that ended with Harris’ TD that made it 21-17.

“In the grand scheme of things, that was a huge drive,” Brees said, noting that both teams had relatively few possessions because each produced several time-consuming scoring drives. “To be able to get seven points as opposed to three, obviously in kind of dramatic fashion there with those last couple plays, that ends up being a huge turning point in the game.”

SLYE’S SWING
Slye, whose career-long field goal was a 55-yarder, said he had hit from 60 yards in warm-ups with yardage to spare and “wasn’t really worried about missing short from 65.”

“I hit a pure ball and left it a couple feet short,” he added. “It’s still a little frustrating because I have the strength to hit further than that. I just came up a little short.”

Slye said he has made field goals as long as 59 yards in the preseason and 73 yards in practice, albeit with the wind behind him.

FANS IN STANDS
In the Saints’ fourth home game of 2020, ticketed fans were permitted inside the Superdome for the first time this season. An agreement with the city allowed 3,000 members of the public plus player and staff guests to sit in the lower bowl of the stadium.

While the fans were audible and appeared delighted to be in attendance, crowd noise was negligible relative to the deafening levels reached when a typical non-pandemic crowd of 73,000 fills the dome.

Saints: Left tackle Terron Armstead left the game in the first half with an arm injury and was replaced by James Hurst. Hurst gave up a sack by Brian Burns on which Brees fumbled, stalling a Saints threat and initiating a Panthers scoring drive. Receiver Marquez Callaway limped to the sideline in the fourth quarter but said after the game he was OK.

UP NEXT
Panthers: host Atlanta on Thursday night.
Saints: visit Chicago next Sunday.