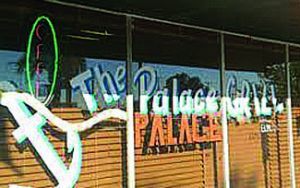 So there I was minding my own business eating fried chicken and all the trimmings while talking with friends in a sunny booth near the window at the Palace Grill on Highway 49 and in walks in every big Tom, Dick and Harry in the state.

When people ask me which restaurant, I frequent the most often, I always smile and say, the Palace Grill. I’ve written about the Palace before. One thing I love about the Palace besides the food, is the down-home attitude and feel of the place. The waitresses are Mississippians through and through. The clientele are colorful, but keep to themselves mostly. The one thing that stands out above all about this place is that nothing exciting ever happens. No loud obnoxious customers throwing fits, no tantrums by wait staff. Just an everyday wonderful time surrounded around the special, which is a drink, an entrée, three sides, rolls and a desert.

In what now seems a lifetime ago, I was a Soldier and a damn good one too. Part of that training that sticks with me is being observant of my surroundings, otherwise known as situational awareness. On Monday, I was sitting in a boot and laughing it up about whatever conversation my eating companions thought up as I noticed something odd. Two guys were sitting at the counter dressed nicer than the usual customer and a super young pretty blonde hovering near the door. I also noticed that the waitress who is usual hard to rattle was sweating bullets and was nervous. I couldn’t put my finger on what I was noticing and then it happened. A motorcade pulled up to this little crusty hole in the wall diner and Vice President Pence got out. He walked in and waved and then came over to my table where I had a couple of Sailors sitting with me. He engaged with us for about five minutes and got our opinions on the menu among other things…it was a blur. He settled on the meatloaf for himself and Lt. Gov. Tate Reeves. Senators Cindy Hyde-Smith and Wicker apparently weren’t hungry, not was Congressman Palazzo since they didn’t order anything.

An impromptu press conference was made in the middle of the eatery and selfies/groupies were captured to commemorate the occasion.

It was a surreal moment and it was over just as fast as it had started and the motorcade pulled away as it sped toward the coliseum to rally for Tate Reeves for governor. Tate Reeves ended up winning the election the next day and I am sure his memory of the Palace Grill will fade, but I will remember with hilarity till my dying day of the old cantankerous man in the corner who didn’t even wait for the VPOTUS to leave the restaurant before he started hollering. Now that the big wigs are gone, can I get my damn dessert. He was disappointed to find that it was carrot cake day and not peach cobbler as he hoped. I reckon he will be okay since he is there faithfully in his booth daily and we are blessed with peach cobbler at least twice a week.

USM Student Has a Front-Row Seat to History-Making Innovation 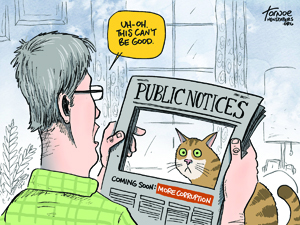 Who Cares About Public Notices? You Should.