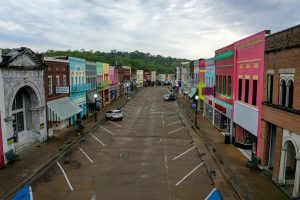 Being a life-long foodie and a food writer for my entire adulthood, the idea of traveling to a remote destination for a dish is something of a pilgrimage.

Not too long ago, a letter came in the mail addressed to me and in parenthesis, the Great Foodini. I can’t remember ever having received a letter as the Great Foodini before so I was thoroughly impressed and excited.

In the envelope was an invitation, with complimentary arm bands to the 44th Annual World Catfish Festival, which is located in the widely-known catfish capital of the world, Belzoni, Miss.

So, armed with a new sense of purpose, I woke my kids at 5 a.m. last Saturday and traveled to the heart of the Delta and made my way to the festival.

One funny thing about delta is that getting there is no direct way to go. All of the roads seem to find their way there, by the way of somewhere else, but as I was leaving from the coast, I took the most direct route I could find, Hwy 49. There is really no sign that says, welcome to the Delta, you just kinda realize when you are there. The first thing I noticed where the rolling fields which were a bit waterlogged and you would see majestic antebellum homes just down the street from shanty shacks that seemed to be in the throws of being reclaimed by the Earth all while human did their daily business in and around these humble abodes.

As we arrived to the festival, the smell of kettle corn filled the air and sultry blues bellowed from the main stage. The whole four-square blocks of downtown were blocked off and an information booth at the entrance was passing out fliers for the Little Miss Catfish pageant and a little red riding hood play by the Belzoni garden club was being hilariously performed for patrons who had a dollar in their pocket, which had a strong cautionary tale of the importance of literacy. My nine-year-old, being a typical smart butt looked at me and asked if the winner will have the longest whiskers. I shushed him and he then learned that the girls on the stage were pretty cute, but of course I would never get a confirmation from him. 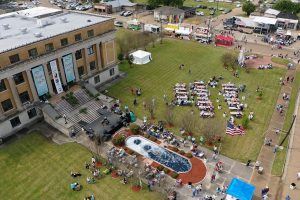 After walking through the town and finding a few locals, I felt like I had gleaned the best intel I could about the state of the city’s catfish restaurants. Most locals pointed me toward Allison’s. As we walked a block and a half, we realize this was either going to be amazing or a mistake due to the line that ran out the door and spilled into the street.

It was packed. Packed is an understatement. This staff here were under siege by people like me with big bellies and even bigger appetites that were here for one thing and one thing only, fried catfish. The staff, even though they were no doubt going through the most stressful day of their year, were all smiles and the picture of a constant professional. The catfish plates came out fast. It was good, but I could tell it wasn’t the best they could do. Again, they were overwhelmed. I was impressed with the place and on any other day, I think I would be impressed with the catfish, but I think I hit them on the worst possible day of the year.

After my family and I walked the lunch off at the festival, we retreated back to Yazoo City at a boutique hotel that I had found online. By 3 p.m. in Yazoo City on a Saturday, most folks were either at the catfish festival’s headliner blues concert or off in their cute homes that lined the streets just outside of downtown. The main street, which hotel sat on, looked as if it had previously been a bustling metropolis, now it seemed more of a quirky fun street with neat eclectic shops and all of the buildings where bursting with color like a basket of Easter eggs. The inside of the Main St. Hotel had the interior of a farm house to include hard wood floors and a claw foot tub. It was charming and a nice tucked away, getaway from the world.

Having been a bit disappointed earlier in the day with my catfish meal, I decided to do more intel and find a truly amazing place in Yazoo. I found it. The proprietor of a antique store gave me directions to Clancy’s. His warning made me pause for a moment before deciding that this is the place to be.

“Follow my directions, don’t follow the GPS, the original burned down and now they are in a double-wide on the side of the highway,”

Not expecting any ambiance whatsoever, we made our way there. He was right. It wasn’t pretty to look at, but the menu was.

My wife had her fill of catfish earlier and decided to try a barbecue sample plate. I tried the catfish platter. The catfish was perfect. Lightly breaded but seasoned well that gave way to an extremely savory flavor. For the first time in quite some time, I ate so heartily that I bit my tongue while eating and I also bit my own thumb. That’s how much I enjoyed this catfish. We also shared a great plate of sliced, battered and fried Jalapeño slices.

With this being the perfect catfish meal, I retired back to the farmhouse styled hotel and slept like a bear. If you’ve never been. Go to the Delta, stay longer than I did and really go after the culture there. You will love it and come back feeling refreshed like I do now.