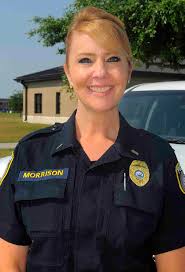 It was pitch dark with the walls seeming to close in as the five-year-old little girl pleaded and begged to anyone that might hear her for a glass of water or a scrap of food. She was terrified while she and her brother relied on each other for comfort and support for the two days she was locked in a closet after being kidnapped by her biological dad and driven miles away from home.

After she was ready to succumb to defeat thinking she would never get out, she saw what she considered a heavenly light. The red and blue glow from police lights filtering in through the crack under the door. Moments later, light blinded her as the door flew open and a pair of strong arms picked her up and hugged her.

That’s when Katie Morrison, one of two training officers for the Naval Construction Battalion Center’s security force, remembers her first interaction with a police officer.

Morrison carried the desire to be an officer of the law, or to be a part of something that could help others, through her school years. That’s when she decided to join the Navy.

“I entered the Navy as a Ship Serviceman in San Diego with a goal,” said Morrison.

After being stationed in San Antonio after her police training, she did a tour at the Naval Construction Training Center.

During that time, Morrison decided to get out of the Navy to pursue the military police career further as a civilian. Morrison made that dream a reality in 2002.

“At the end of my tour at NCBC, a civilian patrolman position on base became available,” Morrison explained.

During the time Morrison was initially working for the NCBC security forces, there were only two females in the entire department.

“This is all I’ve ever wanted to do. It was amazing – I got to get up every day and do my dream job, and I still feel that way,” said Morrison.

“When I was a young female and I looked at women in leadership roles. I worshiped them,” said Morrison.

“When women come up through the ranks in a male-dominated area, I think it is amazing. I love to talk to young troops and young ladies and help guide them with hard work. I’ve always tried to work as hard as the guys, shoot as good as the guys go into all the tactical classes with as much enthusiasm and professionalism as the guys,” said Morrison.

Through the years, there have been perks added to Morrison’s already-proclaimed dream job.

The structure of the security departments Navy-wide changed over the years with things like the realignment of the civilian officer rank structure and the addition of law enforcement pay, which resulted in a pay jump. Other incentives that helped recruit and retain officers on the installation over the years were pay incentives like overtime, weekend pay and Sunday premium pay, which bolstered the paltry pay of then Patrolman Morrison’s $11.84 an hour.

“Even though I work in training, I have a part in operations because officers come to me all day, every day, and ask for guidance and help on various topics,” said Morrison. “I’ve been working here for a while and have had my hand in various duties and responsibilities over the years.”

Even though Morrison has made it far, she feels she has more to accomplish.

“My ultimate goal within the department is to become the top civilian, as the Assistant Security Officer. My first step would be chief of police and then the assistant security officer,” said Morrison.

For now, according to Morrison, her goal is to do the best job she possibly can.  To get to that next level, Morrison knows she has other areas to focus on.

“I am already, and will continue to put in the hard work, to learn about leading a whole department. Being there for so long, I have learned so much about individual departments and understand the roles and responsibilities they play to make the whole team function,” said Morrison.

Morrison is not only considered a role model at work, but also at home as a single mom to two daughters and a son.

“My son has goals to be a canine officer and my daughter plans to go into forensic science,” said Morrison. “I am very proud to have been given all of the opportunities in this career and I look forward to seeing the impact that I have had on my own children as they begin their paths soon in careers of their own,” said Morrison. 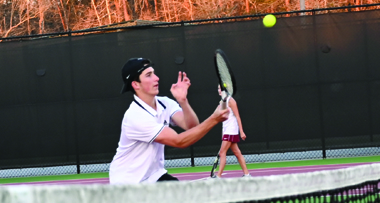