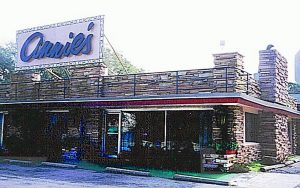 During the early 1920s, excitement ran high along the Gulf Coast in anticipation of the completion of the Old Spanish Trail that would bring tourists driving in automobiles on newly paved roads between California and Florida. Hotels and Travel Courts were being built at all the cities along the way. Commissioned in 1920 was the Drackett/Bean Ferry that made its crossings on the Bay between Bay St. Louis and Henderson Point. In mid-1926, a 1400-acre development at Henderson Point was headed by Allen Johness. Seven miles of canals and lagoons were dug while the marsh areas and low points were filled with dredged material. In Spanish style motif, Bradley’s Restaurant and Lounge was built on the new roadway. The Tropicana Hotel also in Spanish style was built near by. The Inn by the Sea was constructed in Carribean architecture situated south of the railroad tracks. In 1928, Annie’s Place opened as a drive-in, serving sandwiches and soda to the tourists who stopped off from the old wooden bridge that was then part of the link along Highway 90. It was opened and operated by “Big Annie” and her husband “Poppa Sam” Pagano. In 1937, the son and daughter dancing team of Annie and Sylvester Pagano, were winners of the “Big Apple” and “Trucking” dance contests held at Uncle Charlie’s Night Club in Bay St. Louis. In 1939, the drive-in was moved out of the street to the Pagano lot and underwent a major change with a stucco facade that replaced the original frame house. This was the same year that Annie Jacqueline Pagano graduated from St. Joseph High School in Pass Christian. As a present from her parents, she was given a graduation open-house and dances hosted at their Henderson Point restaurant. In 1960, the retired owner of Annie’s Restaurant, Gaetano Sam Pagano, died. Born in Italy, Sam lived in Pass Christian for 50 years. He had two daughters, Mrs. Annie Lutz and Mrs. Catherine Luce, and two sons, Salvadore and Sylvester Pagano. This was the same year that the restaurant underwent a complete renovation. Thayer Lutz, Annie’s artist husband, took personal charge of the interior design using copper items in unique decor and installing bells throughout the premises, with the heavy ones placed in the patio garden. Needless to say, each time disaster struck, Annie’s was resurrected. When the debris from Hurricane Camille was cleared away and utilities restored, an on-site sandwich business was opened until other local food dispensers started operating. Then the Lutzes close down to restore the main dining area and kitchen facilities. In the process, they expanded the dining areas to include the Garden Room, Sun Room, and the Cellar Door only to be struck once more with a calamitous fire in 1972. Asif this wasn’t enough, in 1980, a van ran through the dining room’s front wall, causing the establishment to close down for two weeks of repairs. Each time following a calamity the place was rebuilt, strong family ties were demonstrated as Annie’s two brothers rolled up their sleeves and assisted in restoring the establishment. In March 1978, Annie’s Restaurant celebrated its 50-year anniversary, hosted by its principal operators; Annie, and her husband Thayer Lutz, and her sister Catherine. This was a demonstration of their gratitude to the large family of coastal regulars that dined at Annie’s. They had an open house celebration that was extended to their many regular guests. In 1958, Vaughn Monroe, popular singer in movies and TV, had supper at Annie’s Restaurant and he responded to requests for autographs. Throughout the years among other celebrities Robert Mitchum and Jane Russell were included. The large, modern restaurant was uniquely decorated with copper barrels from breweries and copper cheese vats from dairies in the Midwest. The Lounge featured seats made from copper vats and above the bar center was a huge copper vat that was brought in from Wisconsin. The main dining room had a ceiling shelf that was lined with hand carved painted duck decoys. In one of the dining rooms hung wagon wheel chandeliers. There were always several paintings, but in particular the ones that stood out were Santa Clause, Jesus Christ, and “Big Annie.” The dining rooms had open fireplaces and all year long, strains of music added an ambiance of soulful comfort. For years, the bells in the courtyard had peeled for many special or personal occasions. In particular they rang out the old year and rung in the new yearBirthdays, engagements, anniversaries, and even new born babies were reason enough to hear the chimes and gongs issue forth from one or a cadre of the seven large bells that were assembled. In revealing her lifestyle to a local reporter, Annie recounted that the restaurant had been her entire life. Starting as a young car-hop, she Thayer Lutz when he stopped by the restaurant during a visit from Wisconsin. Soon afterwards they were married. Annie’s Restaurant was signaled out as one of the most popular restaurants on the Coast. In the 1950s it became famous for its Fried Chicken and Spaghetti which was continued on the menu. Known for its charm, comfort, and good cooking, the menu listed exquisite cuisine with standard house specialties that included Schmedje Shrimp Royal and Peggy’s Beer Batter Shrimp. Annie Lutz operated more than a restaurant. It was a tradition manifested by stalwart courage and remembered service with sincere warmth toward her guests. As the sole operator for many years, Annie very seldom missed a day of work. Even though she had a dedicated staff of service personnel who stayed their posts for many years, Annie would make her rounds in greeting her guests at each table, to pass a story, or just to welcome them and to acknowledge her gratitude. The Storm of 2005 finally brought an end to Annie’s – as it was completely obliterated by Katrina.