On Friday afternoon, Mississippi Court of Appeals Justice David Ishee was sworn in as a Mississippi Supreme Court Justice at the Gulf Park Campus of the University of Southern Mississippi in Long Beach. The traditional investiture ceremony happened after Ishee; with deep roots from Gulfport, took the oath of office at the Supreme Court building in Jackson on September 18, 2017. 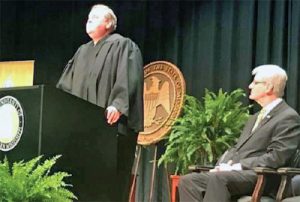 Governor Phil Bryant appointed Justice Ishee to fill the vacancy left in the court after his appointment of previous Justice Jess Dickinson as the Commissioner of Child Protection Services. Ishee seat will fulfill a spot in the Southern District of the MS Supreme Court.

“This position is important because this affects court rulings across three million people in our state,” said Governor Bryant. “His experience and background understands that you have to obey the law.”

Justice Ishee has an extensive judicial and legal career, serving on the MS Court of Appeals for 13 years, after former Governor Haley Bar-bour appointed him in 2004. Before Governor Barbour’s appointment, he served as a municipal judge in Pascagoula for 6 years, then Gulfport for five.

Additionally, Justice Ishee served as a president of various civic organizations while spending 16 years in private practice on the Coast.

The son of late Representative Roger Ishee, Justice Ishee was born in Gulfport, gradu-ated from the University of Southern Mississippi with a degree in history. Following his bachelor’s, Justice Ishee received his juris doctorate (J.D) from the University of Mississippi’s College of Law. He has since become an adjunct professor at Missis-sippi Gulf Coast Community College, Mississippi College School of Law, USM-Gulf Park, and Ole Miss.

The Mississippi Supreme Court has nine justices, three from three regions of the state (North, Central, and South). 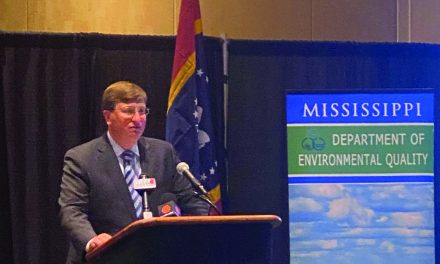