Pass Christian Pirate running back Tionne Frost put a chill on the West Harrison Hurricanes Friday evening and Teree’ Johnson and his defensive pals slammed the door shut as the Pirates (1-3) picked up their first victory of the season with a 21-7 Homecoming victory at McDonald Field.

On defense, the Pirates only yielded 119 yards of total offense to the Hur- ricanes on the evening. Johnson collected 10 total tackles — six of which were for a loss — three sacks, two forced fumbles, and two blocked punts.

“Teree’ had an amazing game for us tonight,” Pirate Head Coach Casey Wittman said. “He did it all. I felt like we controlled the line of scrimmage on both sides of the ball and finished strong. I’m proud of the team tonight.”

After holding the Hurricanes to two three-and-outs to open the game, Johnson blocked his first punt of the game and the loose ball was scooped up by Gage Scruggs, who took it 27 yards to the end zone.

The point-after gave the Pirates a 7-0 lead with 5:49 to play in the first quarter. The Pirates moved the ball well for the remainder of the first half, however, the Hurricane defense stopped them three times to keep the score 7-0 headed into the half.

A sack by Cody Travis ended one Pirate drive and Keith Holloway’s leaping interception in the end zone ended another drive just before halftime.

“We left a lot of points on the field in the first half,” Wittman said. “The first three weeks, we have been leading at the half or right there. We challenged them at halftime. I said it was time for us to make a stand and go out there and take it.”

Tionne Frost apparently got the message. On the Pirates’ first play from scrimmage in the second half, Frost broke free and rumbled 71-yards to the Hurricane one. Quarterback Dustin Allison scored on a one-yard run on the next play and the point-after extended the Pirates lead to 14-0.

“I knew we had to go out there and score,” Frost said. “The line gave me a hole and I just told myself to go. It was a big play and I think it set the tone for our offense the rest of the game.”

The Hurricanes, however, were not ready to call it an evening.

On the ensuing kickoff, Ahmad Gage took the ball at the 12, made some nice moves, and motored 88 yards for a touchdown. Gage, who is also the Hurricane’s quarterback collected 79 yards rushing in the game. He completed two of seven passes for 14 yards.

Early in the fourth quarter, the Hurricanes put together their best drive of the game, moving the ball to the Pirate six-yard line and threatened to tie the game. The Pirate defense then came up big with a goal-line stand.

Johnson had a tackle for a loss and a sack on the series, Nate Stewart and John Parfait combined for another stop for a loss and Scott sniffed out a fourth-down screen pass to give the ball back to the Pirate offense with just over eight minutes to play.
The Pirates promptly marched 86 yards to seal the game.

Frost had 67 yards on the drive, including the 35-yard touchdown to cap it. Reese Baughman added the point-after and the Pirates were now in command 21-7 with just 4:49 to play.

A final Hurricane drive was thwarted when Johnson caused his second fumble of the game and Weatherly recovered it at the 39 with just over two minutes remaining. The Pirates ran out the clock from there. Weatherly, a senior, said the victory was a “team effort.”

“It’s great to get a win for Homecoming,” he said. “We have been close this year and we wanted to break through before district play. I think this will give us a lot of motivation.”

Wittman said he hopes the team will build on Friday’s win.

“We still have a lot of football ahead of us,” he said. “We have a good team. We have to keep working hard and get healthy.”

The Pirates will travel to Sumrall next Friday and then enjoy a bye week before beginning district play. 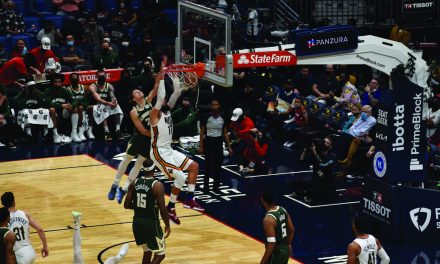 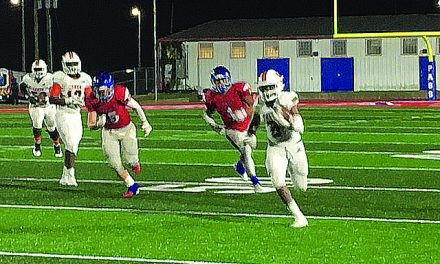